The ALPHA250 power supply must be turned off before connecting or disconnecting:

Power up the board

First, insert the micro-SD card into the micro-SD slot. Then connect the 12V jack of the power supply. The power good green LED (PWGD) and the FPGA done orange LED (DONE) indicate the system has correctly started.

Communicating with the board

The ethernet port is the main communication interface with the ALPHA250. It can be connected to a local network via a router or directly to a computer. The last 8 bits of the IP address are displayed on the 8 user LEDs.

The serial UART debugging interface can be accessed by the micro USB connector. The required steps are described here.

Important note: Power up the board first and wait for the board to boot before connecting the serial cable.

The external supply connector is a jack with 1.95 mm center pin and 6 mm outer diameter. Only 12 V must be supplied on this connector. Running the ALPHA250 requires at least 1 A. More current may be required depending on the load on the expansion connector. Maximum current is 3 A (protected by an electronic fuse).

This is a USB 2.0 host connector. It provides up to 1 A current at 5 V (shared with the 5 V supply of the expansion connector). The power and data pins are ESD protected.

Connects to the UART0 PS core via a FTDI device. It is used as a debugging serial interface. The power and data pins are ESD protected.

The micro SD card is connected to the SD0 PS core via a level-shifter. The SD card I/Os are ESD protected.

The RF Analog-to-Digital Converter has 2 acquisition channels with 14-bit resolution and 250 Msps maximum sampling rate (Linear Technologies LTC2157-14). It has two inputs labeled IN0 and IN1 on the SMA connectors. The inputs are DC coupled and 50 Ω terminated. The optimum DC offset is reached when the input is driven from a 50 Ω output impedance source. The peak-peak input range is 1 Vpp (between -500 and 500 mV). The inputs are protected by a transient voltage suppressor clamping over-voltages beyond ±8 V.

The encoding clock of the ADC is provided by RF_ADC_CLK.
The ADC is interfaced to the I/O Bank 34 of the FPGA. It consists of 14 LVDS pairs operating in double data rate. The maximum transfer rate per LVDS pair is thus 500 Msps. The transfer protocol is described in the LTC2157-14 datasheet. A clock synchronous with data ADC_CLKOUT is connected to the Bank 34 .

The RF ADC is configured by the configuration SPI bus. The source code of the matching C++ driver is on GitHubGitHub.

The RF Digital-to-Analog Converter has 2 outputs with 16-bit resolution and 250 Msps maximum sampling rate (Analog Devices AD9747). The outputs are labeled OUT0 and OUT1 on the SMA connectors. Output impedance is 50 Ω. The outputs are protected by a transient voltage suppressor clamping over-voltages beyond ±8 V.

The sampling clock of the DAC is provided by the RF_DAC_CLK of the clocking system. The input data lines are interfaced to the I/O Bank 35 of the FPGA. It consists of 32 single-ended lines at 3.3 V.

The RF DAC is configured by the configuration SPI bus. The source code of the corresponding C++ driver is on GitHub.

The clocking system is organized around the ultra-low phase noise clock generator (Texas Instruments LMK04906). A dual PLL setup is used. The first loop locks an ultra-low phase noise VCXO (ABLNO-V-100.000MHz) onto a reference clock. It serves as a phase-noise cleaner for the reference clock. The second loop locks the LMK04906 internal VCO (2.37 to 2.6 GHz) onto the VCXO. A set of clock dividers allows to produce up to six clocks at desired frequencies.

The clock generator is designed to accept 10 MHz reference clocks.

The reference clock sources are:

The precision ADC is a 8-channel, 24-bit sigma-delta ADC with programmable gain amplifier (Analog Devices AD7124-8). The inputs differential pairs can be used to sense either floating or ground referenced signal. They also facilitate Kelvin sense connections. Differential input voltage range is ±1.25 V. The voltage on any precision ADC input pin must be between -1.8 V and +1.8 V.

The output voltage ranges from 0 to 2.5 V. It includes an output buffer that can deliver up to 20 mA per channel. The outputs are ESD protected.

The four output channels are available on the expansion connector. Communication with the precision DAC is done through a dedicated SPI bus via the PrecisionDac driver.

The ALPHA250 has two high-accuracy temperature sensors (TMP116) with an accuracy of ±0.2 °C over -10 °C to +85 °C. One sensor is placed near the voltage reference (T0 highlighted in blue) to allow temperature compensation in high precision measurements. The other one is placed between the clock generator and the RF ADC which is close to the hottest point on the board (T1 highlighted in red). 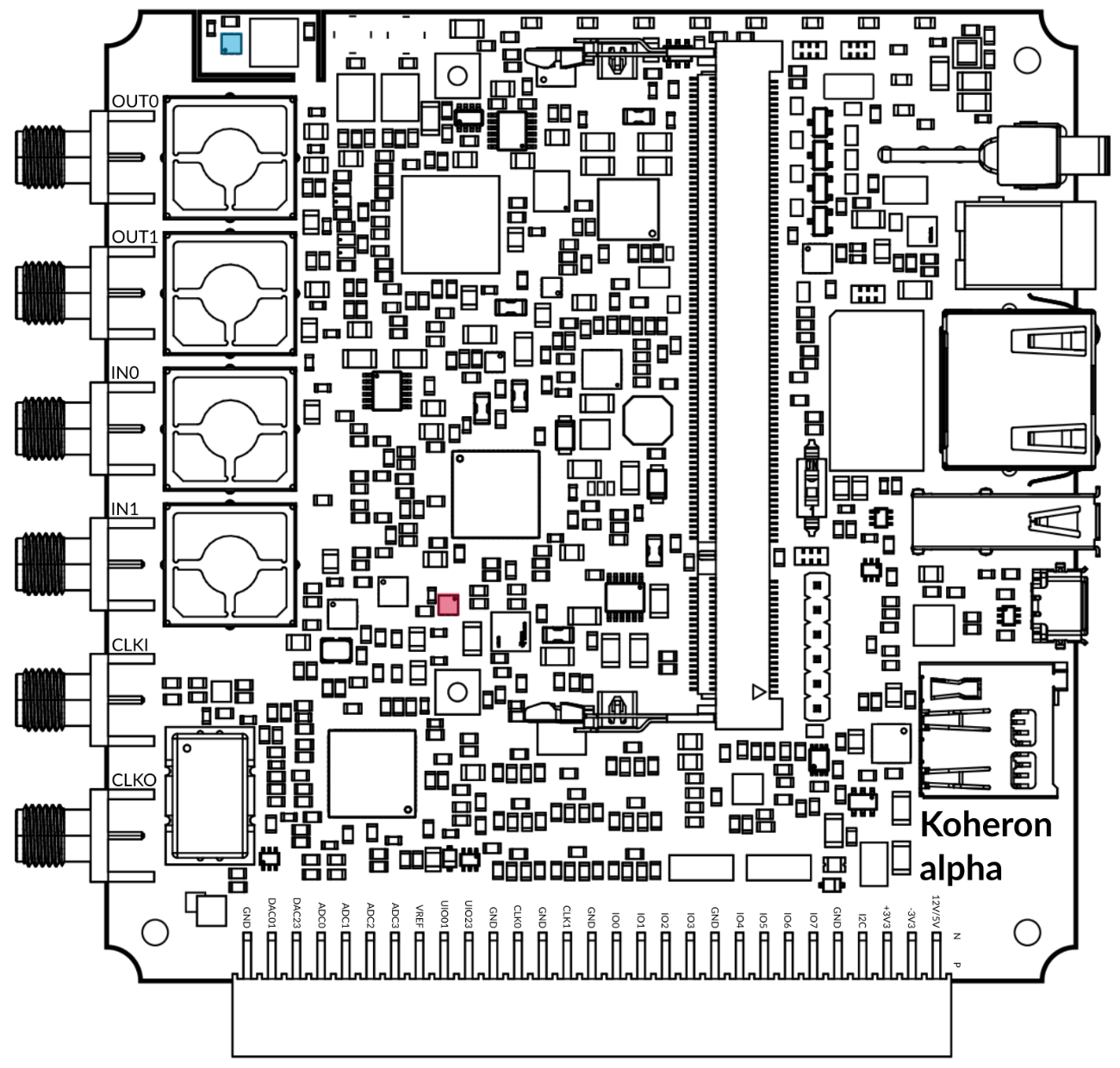 ALPHA250 temperature sensors. Voltage reference in blue, board in red.

The Zynq temperature T2 is also monitored using the XADC on the FPGA. The TemperatureSensor driver allows to retrieve the 3 above temperatures. For reliable operation, make sure that T1 < 70 °C and T2 < 85 °C.

The ALPHA250 includes two power monitors (Texas Instruments INA230). Two rails are monitored: the external 12 V power supply and the clocking subsystem supply. In both cases, the current shunt resistor is 10 mΩ. Both power monitors are accessible on the I2C0 bus via the PowerMonitor driver.

The EEPROM is divided into two parts. The lower addresses are used by Koheron to store identification and calibration data. The higher addresses (above 0x1000) are for user applications. The EEPROM map addressing is given in the table below.

The Zynq XC7Z020-2CLG400I has 2 I/O banks for the programmable logic (Banks 34 and 35) with 48 IOs each. One bank (Bank 0) is dedicated to the processing system with a multiplexed I/O (MIO) interface. The set of peripherals and interface buses is depicted below.

I/O constraints are defined in the ports.xdc file on GitHubGitHub.

The RF ADC is interfaced to the Bank 34 by a LVDS parallel bus. The data for each ADC channel are transferred in double data rate on a 7 line sub-bus. The RF ADC also provides a clock synchronous with the output data ADC_CLKOUT. The configuration is performed via the configuration SPI bus.

RF ADC0 is interfaced to Bank 35 and RF ADC1 to Bank 34) by a LVDS parallel bus. The data for each ADC channel are transferred in double data rate on a 7 line sub-bus. The RF ADCs also provide clocks synchronous with the output data ADC0_CLKOUT and ADC1_CLKOUT. The configuration is performed via the configuration SPI bus.

The RF DAC is interfaced to the Bank 35 by a LVCMOS 3V3 parallel bus. The data for each channel are transferred on a 16 line sub-bus. The configuration is performed via the configuration SPI bus.

A shared SPI bus is dedicated to the configuration of the RF ADC, the RF DAC and the clock generator. In the reference design, a HDL core is used for the communication on this bus. The interface is described below.

The configuration SPI bus pins are connected to Bank 34 with 1.8 V LVCMOS signals.

The core is write only. It does not read back configurations from the chips. The s_axis_tready signal can be used to determine when the core finishes sending a message and is ready to send a new one.

The core can send 1, 2, 3 or 4 bytes of data. The number of bytes to transfer is specified using the bits B2 and B3 of the cmd byte according to the table below.

The chip select address is specified using the bits B0 and B1 of the cmd byte according to the table below.

The transferred data must be wired to the s_axis_tdata pin. The transfer is triggered on the s_axis_tvalid pin falling edge. The core is controlled via the SpiConfig driver.

A dedicated SPI is used for the communication with the precision ADC. The bus is connected to PL I/Os on bank 34.

The precision ADC SPI pins are connected to the Bank 34 with 1.8 V LVCMOS signals.

In the reference design, the precision ADC SPI bus is connected to the SPI0 PS core. This is done using the EMIO interface which allows to connect PL signals to the MIO interface of the PS. It can be controlled using the PrecisionAdc driver.

Data is transferred to the precision DAC using a SPI bus that can be clocked up to 50 MHz. In addition, a latched pin LDAC pin is used to update the 4 channel outputs synchronously. In the reference design, a dedicated HDL core is used. The interface is shown below.

The precision DAC SPI pins are connected to the Bank 34 with 1.8 V LVCMOS signals.

While the valid is high, the core updates the DAC channels with the values on pin data. The 64 bits of the data pin contain the concatenation of the 4 x 16 bits values to be set on the 4 channels. Channel 0 being on the 16 least significant bits, followed by channels 1, 2 and 3. After sending the data for the 4 channels, the core latches ldac. The data will be synchronously updated if cmd = 1. If cmd = 3, the output is updated as new values arrive. The core is written in Verilog. It is controlled with the PrecisionDac driver.

The processing system contains hard cores (by opposition with the soft cores that can be deployed on the PL). The PS cores are interfaced with MIO pins on Bank 0. The logic level is LVCMOS 1.8 V. MIO configuration can be found in the board configuration file.

Configuration of the Zynq peripheral I/O pins in Xilinx Vivado.

The constraints file for the PS is:

This bus is used on the ALPHA250 internally and is not accessible from the expansion connector. The I2C0 bus addressing is:

The I2C1 bus is for the expansion connector. A 3.3 V level shifter with 2.2 kΩ pull-ups provides the interface with the Bank 0. The I2C1 core can be replaced with a CAN core CAN0 with proper PS configuration.

The ethernet peripheral is interfaced with the ENET0 MAC core.

The USB 2 connector is interfaced with the USB0 core.

The SD card is interfaced with the SD0 core.